INDIANAPOLIS — Simon Pagenaud had perhaps as good an explanation as any for how he won the 103rd Indianapolis 500 on Sunday.

“This race chooses its winners,” Pagenaud said after holding off Alexander Rossi in a frantic finish. “Today, I was the chosen one.”

Also helping Pagenaud was his uncanny ability to anticipate Rossi’s moves. That allowed him to hold off Rossi, who won the race in 2016 and who said he was driving at “eleven-tenths” during the final 12 laps, trying to wrest away the lead.

“Nothing else matters here but winning,” said a disappointed Rossi, who came up just two-tenths of a second short. “I know that. This one will be hard to get over.”

Among the obstacles Rossi had to overcome was a perilous blocking move Pagenaud put on him the final lap, swerving back and forth across the track in his path. Asked if he had considered lodging a protest, Rossi said: “It was the final lap of the Indy 500. Simon was leading. I don’t think anybody will do anything about it. It was unfortunate.”

Rossi was also thwarted by a backmarker who refused to yield, pushing him into a wall. A driver nearly blocked him off the track, and a stuck fuel valve during a pit stop cost him valuable time and track position.

Rossi said that his general observation about this year’s race was that drivers had failed to show one another proper respect on the track. They bumped one another out of the way, cut one another off in a dangerous manner and caused accidents as a result.

A five-car pileup, the only major wreck of the day, was caused by one driver’s refusal to yield to another, blocking him into the infield grass. Officials stopped the race for 18 minutes to clean up the mess, setting up a final dash among the front-runners.

Of the 17 drivers who completed the full distance, from a field of 33, Pagenaud easily had the smoothest sailing.

“I mean, no problems,” he said. “No mistakes, on the track, in the pits. I said before the race that is what it would take to win here.”

Pagenaud, who turned 35 last week, led 116 of 200 laps around the two-and-a-half-mile Indianapolis Motor Speedway oval. He also won the Grand Prix of Indianapolis two weeks ago on the site’s road course and had earned the pole position for the 500. 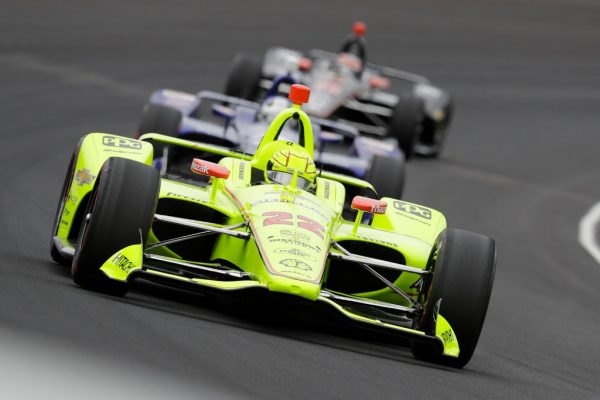 Pagenaud had been rumored to be on the outs with Team Penske, but after his win on Sunday, the team owner Roger Penske insisted the driver would be back next year

“So yes, it was the perfect month for us,” Pagenaud said. “But that is what Roger Penske hired me for: to win.”

“Did you see that?” Penske exclaimed after the finish. “Can you believe it? I can’t. That racing, side by side, lap after lap, that’s as good a racing as I’ve ever seen.”

That was high praise from a team owner who has been entering races since the 1960s and now has a record 18 victories in the Indianapolis 500.

“When you have a car like this, a team like this, you just work your way, achieving and executing, to the end result,” Pagenaud said. “We executed perfectly today. No mistakes. And here we are, Victory Lane, man. We did it.”

When Pagenaud then hoisted the quart of milk traditionally given to the Indy winner, he took a swig and then poured the rest over his head. “I love milk!” he said. “Fresh whole milk.”

Pagenaud, a native of Poitiers, France, said he developed a taste for milk while a teenager stocking a dairy case in his father’s grocery store.

That is also when he got his start playing video racing games and dabbling in go-karts. He showed enough aptitude that he quit his supermarket job and moved to the United States 15 years ago to pursue his dreams of racing someday at Indy.

He finally managed to enter IndyCar in 2011 and won his first race two years later, catching the eye of Penske. He won the 2016 IndyCar title for Team Penske but had been enduring something of a dry spell before this month.

“This is a dream come true,” Pagenaud said. “A lifetime of trying to achieve this.”

Penske dispelled rumors that Pagenaud’s contract might not be renewed after this season.

“Simon will be back with us next year — you can count on that,” Penske said. “I can kill that rumor right here, right now.”

After taking the checkered flag just a few feet ahead of Rossi, who was closely followed by the 2017 winner, Takuma Sato, and by his Penske teammates Josef Newgarden and Will Power, the 2018 winner, Pagenaud broke with the Indy tradition in which the winner goes to Victory Lane.

Instead, he stopped his car at the yardlong strip of original 1911 bricks that adorns the finish line, got out, knelt down and kissed them.

“It was awesome to share that with you guys, at the Yard of Bricks,” Pagenaud said on the public address system. “You’re the best, Indianapolis.”