Billie Lourd may have starred in a Star Wars film and be the daughter of Princess Leia herself, Carrie Fisher — but she wasn’t always sold on the Force.

While making an appearance on Watch What Happens Live with Andy Cohen on Thursday, the Booksmart actress revealed she “hated it when I was a child.”

“My mom said I would always cover my ears and say, ‘This is too loud,’” she shared.

The actress, 26, will star alongside her late mother in The Rise of Skywalker, director J.J. Abrams recently revealed to Vanity Fair.

He told the outlet he used old footage of Fisher for the upcoming Episode IX and had cut Lourd out of those scenes with her late mother thinking it would be too painful for the young actress to see.

Instead, Lourd asked him to keep their scenes intact.

He added, “And I never thought it would.” 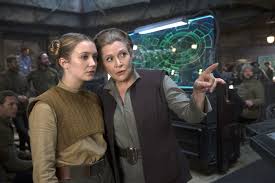 Abrams rediscovered footage of Fisher that was filmed during The Force Awakens and was able to rewrite scenes in The Rise of Skywalker around the old footage.

“It was a bizarre kind of left side/right side of the brain sort of Venn diagram thing, of figuring out how to create the puzzle based on the pieces we had,” he explained.

Abrams addressed her appearance while speaking at Star Wars Celebration in April, confirming the news that the film will use previously unused footage of the actress.

“As I’ve said, we couldn’t,” he said of filling the void. “We all talked about how to move on. She was the best, she was glorious, she was amazing. We all just loved her. It was impossible, there was no way. You don’t recast that part, and you don’t have her disappear. Using CGI was out of the question.”

He continued, “There was actually a way to use those scenes to continue her story. And the crazy thing is, every day it hits me that she’s not here, but it’s so surreal because we’re working with her in scenes. She is alive in these scenes, and in some with Billie, her daughter. Princess Leia lives in this film in a way that is mind-blowing to me.”