In search of his fourth major title, Brooks Koepka began Sunday’s final round of the PGA Championship with a comfortable seven-shot lead.
But the same ultra-focused mentality that has enabled Koepka to win a pair of U.S. Opens and potentially a second PGA doesn’t leave room for distractions.
That means NO distraction of ANY kind.
Not even from his girlfriend, Jena Sims, who television cameras caught in an apparent attempt to give Koepka a good-luck kiss before he began his round.
But the No. 3-ranked golfer in the world had no time for a public display of affection when there was a title to be won.

Sims told Golf.com Saturday, “I’m so not discreet,” Sims said. “I’ll just wave, and he’ll tip his hat. I’ll blow him a kiss. I’m not trying to be too low-key. If I see him and he sees me, I’m like, ‘Hi!’”
Of course, after Koepka managed to hold on and win the tournament by two strokes over Dustin Johnson, all bets were off. 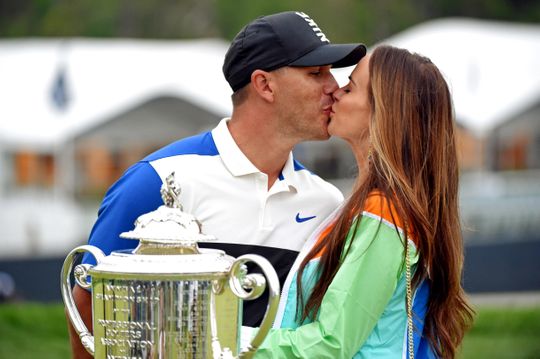 Brooks Koepka celebrates winning the PGA Championship with a long-awaited kiss from his girlfriend, Jena Sims

As he ascended the hill behind the 18th green on his way to the scorer’s tent, Sims was there waiting with Koepka’s friends and family. And he was more than happy to pucker up.

What we think will happen on t...